Summer is still a few months off, but that doesn’t mean we can’t be dreaming of barbecue year-round! Nothing is better than savory pulled pork that melts in your mouth, paired with a crisp, tangy slaw with a kick.

What’s the secret to making juicy, smoky pulled pork at home without a lot of fuss? For those of us that don’t have access to a smoker, the key is liquid smoke. A bizarre ingredient, liquid smoke is made from the destructive distillation, or decomposition, of birch wood. You can skip it if the idea of fake smoke flavor scares you, but the pork just won’t be the same. It’s no authentic southern BBQ, but it sure tastes phenomenal and is a breeze to make.

I used my 2-quart Crock-Pot, but if you have a larger slow cooker, 4+-quarts, you can double the recipe below. However, I still found this made enough for two people for several days! I also recommend preparing the meat a day before, popping it in the slow cooker before work, and then finishing up when you get home. If you have to stay late at work, no worries, this can cook for a long time.

Lastly, no pulled pork is the same without slaw. This cilantro-jalapeno slaw recipe has become a staple in my life. Combine with some toasted rolls and pickles—and you’ve got one bad-ass sandwich.

While your pork is cooking, you can prepare your slaw!

For a chunkier slaw, you can keep the jalapenos separate from the liquid. For a smoother, even spice, blend with liquid as below.

Make it a sandwich, by adding pork, sauce, slaw, pickles & maybe even hot mustard on bread of your choice (I recommend toasting soft rolls). Enjoy! 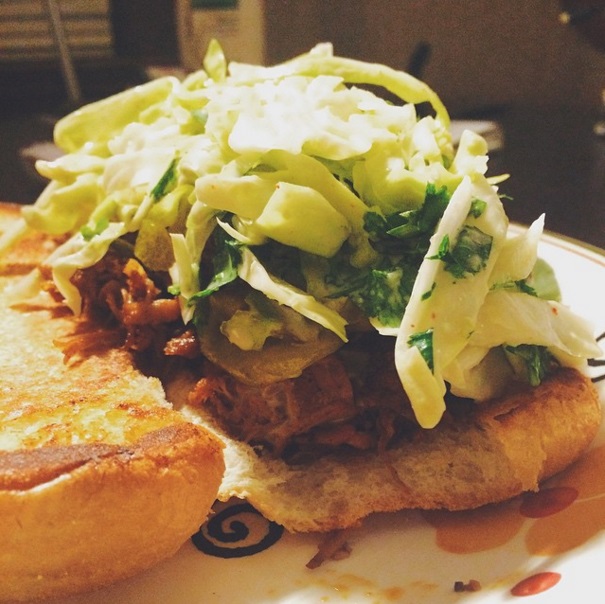